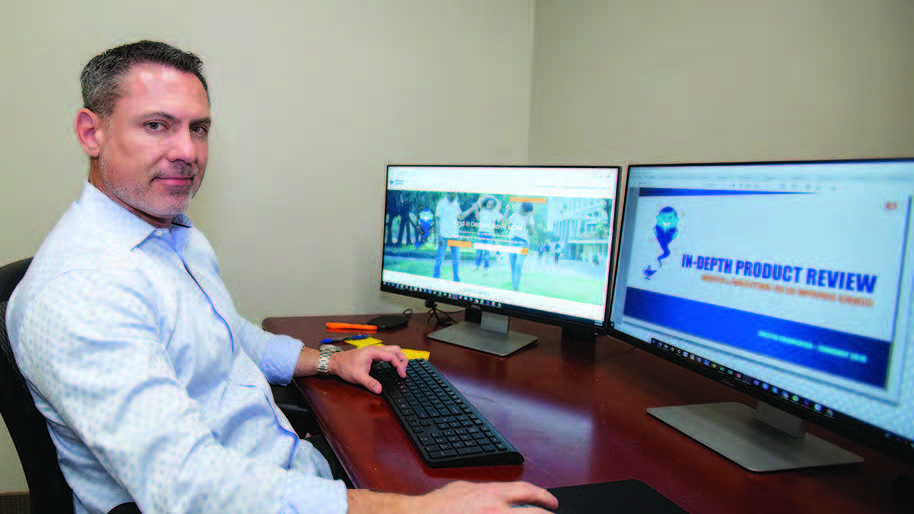 It’s not the drill that’s keeping people away from the dentist chair but fear of the unknown cost of a procedure, according to a Gilbert-based online service designed to help consumers save money.

Dental Genie recently created the first-ever online dental marketplace for people in Arizona to find deals when it comes to their teeth.

“The average patient will see a savings of $200 to $3,000,” said CEO Chris L. Anderson of Gilbert. “The numbers can really get up there for bigger procedures.”

The company compares itself to AirBnb for travel or Uber for transportation by putting the power in the hands of the consumer when it comes to finding affordable dental care.

People can plug in their zip code and view a list of dentists available in their area and the pricing offered per procedure such as extractions, fillings, implants, root canals, dentures and crowns.

For example, an extraction of a lower molar ranges in price from $134 to $156 charged by the five Gilbert dentists on the site and from $106 to $192 among the 40 dentists in the Phoenix metropolitan area.

Anderson explained the price discrepancy for the same procedure as dentists who want to fill their chairs will charge a lower price.

Dentists can change prices for procedures over time, depending on their need for patients, he said.

“One of the biggest issue and complaint is dental insurance is going away and they are limited in their coverage, covering less and less each year,” Anderson said, adding:

“And so, there’s lot of cash-paying patients sitting on the sidelines wanting to go to a dentist. The American Dental Association’s own research shows for 59 percent of Americans the No. 1 reason they are staying away from dentists is the fear of the unknown price.”

He said Dental Genie brings these patients off the sideline because once many of them realize the pricing is in their range and not through the roof, they can plan for it and schedule those procedures with confidence and know the price before they go to the dentist.

Dental Genie is for those who have dental insurance, which generally covers $1,500 a year maximum and hasn’t changed for decades, and those without insurance.

That will be especially useful for older adults with Medicare, which doesn’t cover most dental procedures.

“The pricing you see on the website often time is the discounted price insurance companies are already pushing dentists down to,” Anderson said.

“Our sales team goes to a dentist and say, ‘why don’t you post that price on our platform, that cash price, the same price you are getting from the insurance company, but put it out there and let people know,’” he explained.

Consumer can do the same thing as Dental Genie, but the company does all the leg work.

“The platform provides you several qualified and pre-approved dentists in your area,” Anderson said. “If you take the time to call seven, eight, nine different offices and ask for pricing and talk to the office manager, you can do it. But we give you 10 to 15 dentists in your area in a matter of five minutes.”

Dental Genie is the brainchild of an Arizona dentist who led a group of people in launching the platform with $1 million in capital, according to Anderson.

He declined to name the dentist who he said wishes to remain anonymous at this time because of possible backlash from some in the dental community.

Anderson said the dentist used feedback from his patients over the years to come up with his idea.

“He wanted to transform the way dentists and patients find one another and created this unique online dentist marketplace with not only ratings and reviews but gives transparency in pricing and put it all in one place.

“He sees this as a huge advantage for dentists who embrace it as a marketing tool. It’s what made him successful over the years and his practice.”

Dentists who join Dental Genie are seeing success, according to Anderson.

Those who want to join Dental Genie must go through an approval process so only the highest qualified professional is chosen, according to Anderson. They also must have their own practice and not belong to a corporation.

“We don’t accept everyone,” he said. “It’s an exclusive community. We limit it to maybe 250 per major metropolitan area.”

Dental Genie currently has up to 100 dentists from all specialties such as endodontics, orthodontics and periodontics on the platform, according to Anderson.

Besides the patients, dentists who join also see benefits.

“Dentists are paying $500 a month to subscribe to the platform and we are promising they will see three to five new patients a month, minimum,” Anderson said, adding:

“We are not the end-all marketing solution. Our goal is to help dentists make their practice more successful and grow their client base.”

He said practicing dentistry is increasingly competitive with more grads coming into the marketplace every year.

“Lot of dental practices across the county are struggling, on the verge of bankruptcy,” he said.

And the projected growth rate of the number of dentists per capita between 2017 and 2037 is 4.5 percent, the ADA said.

One of ADA’s analyses predicted dental spending in the United States was expected to grow at much lower rates than in previous decades, even after taking into account the aging of the population.

Its results, the ADA said, suggested that at the aggregate level, the country could be entering a period of expanding supply of dentists and flattening demand for dental care.

“We want to remove the fear of the unknown when coming in for a dental procedure and give consumers the ability to know before they go,” Anderson said.

Are you a private practice dentist? Register here...